Harvest Moon is a long-standing farm simulation series starting in 1996 with the Game Boy release Harvest Moon. Since then it has released a stream of Harvest Moon games, a collection of spin-offs, including the successful series Rune Factory, and an online social network game for the Japanese market. Each Harvest Moon is largely the same, even characters and character types are repeated, but they are all still addictive. Correction (9/20/2014): the 1996 release of Harvest Moon was for SNES not Game Boy.

Part of what makes the series so appealing is that apart from the farming, your character is strongly encouraged to find themselves a life partner. In the Game Cube release A Wonderful Life the character is automatically married off after a year if you haven’t managed to convince anyone yet. They are charming games, slow-paced, relaxing and the characters tend to be overwhelmingly positive.

Up until recent years the games have been released first in male-mode and then later a female-mode. This had two unintended outcomes. First,  that the female games, having been developed later, were less buggy and included more features (it pays to wait in the Harvest Moon universe). Second,  that the games were developed with the original male POV game in mind.  Though different iterations are better than others for this — the female versions often have fewer marriage candidates since the villagers were designed with a male focus (lots of cute single women) and special characters such as the Harvest Goddess and Witch Princess are marriageable but have no real male equivalents.

Which leads to another problematic aspect of the series. Perhaps unexpectedly, games in which you live as a farmer, get married and have a baby are steeped to the ears in traditional gender roles. Traditional roles themselves are not an issue of course, but rather the enforcement of roles to the detriment of people involved (or characters in this case). There are two heart-breaking moments that come to mind, both in the same town. In Harvest Moon DS I was super excited that I could marry the archaeologist, you know, who doesn’t love a smart, ditzy lady? Upon marrying her though, I learn that she had mostly quit digging to clean your house. What had I done?! There’s no reason that she couldn’t carry on her job! I played A Wonderful Life as a teenager when I had all the time in the world and married a flower seller and part-time barmaid. Playing it later I decided I would go for the cuter traveler wandering soul. But part of marrying her means convincing her not to travel but to spend the rest of her life in this miniscule village, and at several points she expresses resentment at staying and having a child. Yes, I’m aware that it’s a fictional character, but I felt so guilty all the same.

I suppose these examples rankled so much because I had made choices not to pursue more traditionally minded characters. Yet the game still handed this role to these characters, all without irony. This aspect makes even less sense when your farmer is female, clearly the main earner (why are none of these husbands contributing to house funds?!) and is the one to propose. In attempting to modernize a series which women are clearly interested in playing, Harvest Moon can seem conflicted in how to deal with romance in this setting.

The games are all hetero-normative, especially the Western releases considering they removed the lesbian option from Harvest Moon Cute. It should be noted that as far as I’m aware there are no other games in which you can choose a same-sex life partner. There is the enigmatic rival Jamie from Magical Melody, who changes gender based on your character.

This brings us to Howard from A Tale of Two Towns. Oh, Howard. He is essentially a caricature, highly camp and played for laughs. His sexuality is never mentioned in the game, so it comes off as a choice made simply because it was deemed funny to have a man wearing lipstick. 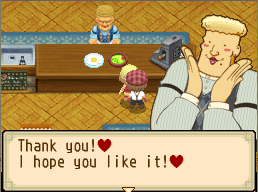 There are a lot of issues with the series, as stated above. My recommendations would be to continue to offer games in which there is a choice of male and female farmer, rather than separate versions, with marriage candidates equally fleshed out and designed with audience in mind. I would think that the game could tackle inconsistencies in traditional roles by simply having marriage candidates conform to these roles to varying degrees. Crucially this would then continue after marriage/child is born. For example man/woman number one wants to be a stay-at-home parent, man/woman number two is a workaholic and will continue to work with the child at the farm or in a day care. A day care would offer lots of opportunities for adorable cut scenes or mini-games too. In my dream Harvest Moon game all the marriage candidates are available whether you play as male or female. We can dream! The series is coming in leaps and bounds with regards to sales in the West. I’m excited for things to come!

7 thoughts on “Oh what a wonderful life! Thoughts on Harvest Moon”

This site uses Akismet to reduce spam. Learn how your comment data is processed.