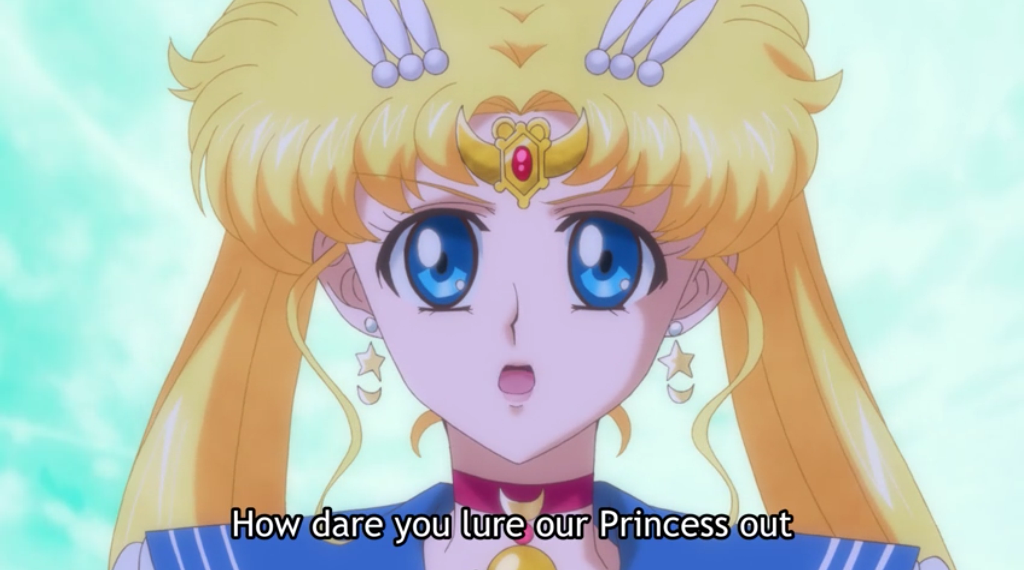 Be sure to check out the Sailor Moon Crystal Page for reviews of Acts I through VII in case you missed them!

I was a bit delayed in watching the latest Sailor Moon Crystal episode due to being a bridesmaid in my best friend’s wedding last weekend, but something tells me that Usagi would be more than understanding. Can you think of a girl who loves weddings more than her? When I snuggled up on my love seat last night in fleecy pajama pants and a blanket around my shoulders, I was super relaxed. Until I started watching this episode that is!

Ok, sure, the episode is supposed to be about Minako-chan, aka Sailor V, aka Sailor Venus, aka “Princess Serenity” (right). And yes, we did get some more info on her and what she’s been up to. I’ve never been a big Sailor V fan due to being jealous of her on Usagi’s behalf, and I didn’t walk away from this episode feeling any differently. ESPECIALLY since they are all calling her Princess!

What made this episode stand out is (surprise, surprise) the unfolding romance between Mamoru and Usagi. I watched this episode on my iPad with headphones, and several times my fiance tapped me on my shoulder after I had a squealing fit, just so he could give me that arched eyebrow look of “really?”

When Mamoru and Usagi run into each other at the park, Mamoru confesses his shame in being unable to protect her from Zoisite (in the previous episode). When Usagi tries to return the broken, star-shaped pocket watch, Mamoru tells her to keep it because he has an item of hers as well. Usagi is flummoxed. She doesn’t know he has her handkerchief, and is nervous trying to guess what it could be. Mamoru does not tell her what it is, but he suggests they exchange the items at some future point.

But the cherry on the top of this episode is when Tuxedo Mask catches Sailor Moon as she falls from the top of a building after being hit by Kunzite’s ray. (Side note on Kunzite – the conversation between him and Sailor Venus hints at a past relationship, much like previous episodes have hinted at relationships between the other senshi and Queen Beryl’s henchmen). Tuxedo Mask lands on the next building, and Sailor Moon blushes and then grasps him around the neck out of love and gratitude.

I was hugging myself and kicking my feet with giddiness. My girly heart was happy and so was my uberfeminist alter ego. Seldom do those two feelings happen simultaneously! Not only does Usagi kiss Mamoru intentionally and while conscious, but she also tells him to run away, because it’s too dangerous, and she’ll take care of the bad guy. I repeat:

She tells HIM to run away.

And SHE’LL TAKE CARE OF IT.

Would you believe me if I told you this scene turned me on a little bit?

Shortly thereafter, Mamoru wonders to himself about Sailor Moon’s strength and her different sides. Hooray for multidimensional character development! This episode also features some par for the course, Sailor Senshi teamwork and hints at a secret mission that Sailor Venus needs to complete. I found myself wondering at the end: does Sailor Venus already know she’s not Princess Serenity? Is she going along with the ruse to protect Usagi? What will happen next?!

Rather appropriately, Act IX is entitled Princess Serenity and the preview to the episode strongly suggests all the Sailor Senshi will regain their memories of the past. November 1st can’t come fast enough.