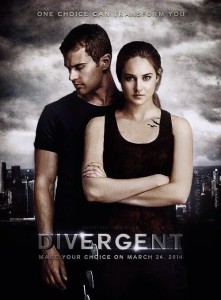 I’ll be the first to admit that I’m a little bit late to the party. I haven’t read Veronica Roth’s Divergent series and I only just watched Divergent on Blu-ray last weekend. Did I mention I also haven’t seen Mockingjay yet? But I’m sure no Divergent fan will be surprised to hear me say this: I LOVE DIVERGENT.

I also love the Hunger Games books and movies. BUT I might just (a teeny tiny little bit) like Divergent more. It’s pretty darn close, but the scales were tipped toward Divergent in how they handled the physical relationship between Tris and Four. Before I get into that, let’s break down Divergent with the Her Story Arc Scale of Inclusivity. I decided to award the Divergent film a 15/15 points.

Not offensive to women = 1 pt

I did not find anything in the film offensive toward women. My enjoyment was not at any point inhibited by any misrepresentation of the female sex.

The entire movie is from Tris’s (Beatrice’s) point of view, and in addition to her there are many other women portrayed throughout the film.

Tris’s mom Natalie does not just disappear after the beginning of the story. There is more to her than meets the eye.

Tori plays a brief, but important role as the one who both tests Tris and offers her insight into her results later on.

Jeanine, leader of the Erudites, is the real villain of the story.

Christina befriends Tris not long after their selection ceremony. She is a source of encouragement to Tris as they move forward in their training.

And finally, Molly is a tough opponent in the ring, but even she eventually finds much to admire in Tris’s tenacity.

I went into this movie with a mediocre interest, anticipating it would be predictable and teeny-bopper-ey (is that a word?). I could not have been more wrong. Tris is a complex character who continued to surprise me as the story moved forward. I truthfully could not predict what was going to happen next in the story. The pacing of the movie was spot on, ramping up in intensity as it came to its climactic ending. In fact, I’m probably going to download the book tonight!

The most intriguing part of the story is the gradual unveiling of Tris’s steely resolve. It is easy to underestimate her in the beginning, but it does not take long to be proven wrong. I think she is a great role model girls.

This movie turned tradition on its head over and over again. Women are treated as physical equals to the men in Dauntless. At no point is Tris’ physicality called into question because she is of the female sex. But as I already alluded to, the creme de la creme moment in the movie is when Tris and Four initiate a physical relationship. Tris tells him she does not want to go fast. She asserts her discomfort, has it respected, and sets the pace for their relationship. Later on her fear of him taking advantage of her is revealed in a startling way, which shows very honestly that this is something young (and old) women worry about. I applaud the movie for tackling this tricky issue and airing it in the light of day.

Moreover, the male character Four has many layers, and reveals his emotions and fears in a way that we just don’t see enough of in movies. He trusts Tris enough to reveal his innermost fears to her, and he expresses trepidation when Tris climbs up to amazing heights (literally).

These are the same reasons why I hold Divergent higher than the Hunger Games. It is much bolder in its confrontation of what teenage girls deal with as they navigate the world on their way to adulthood. Once you move beyond the somewhat more absurd premise in Divergent (that society is separated into four factions), Tris has much more control over her own fate than Katniss does. Yes, part of this is because Katniss lives in a far more oppressive society, but Katniss also ends up in the same old worn-out love triangle so typical of teenage films (see: Twilight). This sort of love triangle does not speak to a real teenage girl’s experiences, and only contributes to the idea that teenage girls are endlessly obsessing over which boy is the appropriate catch, or worse, which one she owes more to and therefore is obligated to love.

Now part of this is the fault of the how the Hunger Games movies have been filmed. I’ve read the books as well (although I prefer the films) and I did not feel like the love triangle aspect came across quite so strong in the books. No one questions that the Hunger Games have done a lot to open up the film industry to blockbusters driven by a female audience, and very probably without the success of the Hunger Games the film Divergent may not have been made. Honestly, the Hunger Games may very well owe its own film debut to the prior success of the Twilight films. Here’s hoping that Divergent will help further pave the way (and shatter the glass ceilings!) to the realistic portrayal of young women on the big screen.