I recently found myself with three newly purchased short story collections on my to-read shelf, each one highlighting the work of a different author. Short story collections can fall into the trap of leaving you unsatisfied by not fully developing the brief glimpses into different worlds, but I was lucky with this trio. Two of the authors were ones I knew I already liked and the third a happy new discovery. While their voices are often miles apart from one another they share an ability to write fascinating characters, both female and male, and a knack for getting you completely immersed with only a brief number of pages. 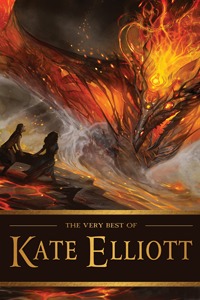 The Very Best of Kate Elliott was published this year. I first discovered Elliott through her Spiritwalker series, which introduced me to her intricate, diverse world building and flair for dialogue, and have also read her Crown of Stars series and the Novels of the Jaran (my personal favorite, even though the series has yet to be completed and please Kate Elliott, please, finish Jaran! I must know all the things!)

One of her strengths is that each of her universes feels completely separate from all the others, though they share the trait of having characters you wish were part of your own life.

If you’ve never read Elliott before this collection is a great place to start. There are stories here touching on almost all of her fictional worlds, which will help you figure out where to read next (believe me, you’ll want to). I loved returning to the Jaran universe, a science fiction setting with many layers including the presence of theatre artists traveling the galaxies to perform for both humans and alien species. This collection’s “My Voice Is In My Sword” involves a production of Macbeth being performed for empathic aliens as the theatre troupe deals with the ego of its leading player. While a particular treat for anyone like myself who loves theatre, I think anyone who appreciates well-written character dynamics will enjoy the piece.

Otherwise my favorite piece was “The Queen’s Garden”, a story of two clever sisters determined to hold the throne that is rightfully theirs. Even in a piece as short as this one, the world building is so intriguing I was left wishing for an entire series in this universe.

The final 4 pieces are essays previously published online, in which Elliot gracefully questions some of the all-too-common trends in speculative fiction. Placed alongside her own stories of powerful, diverse women, they take the collection beyond one which makes you both laugh and cry to a work that is also relevant and insightful.

Elizabeth Bear’s short fiction has netted her several awards (including multiple Hugos) and her collection Shoggoths in Bloom was released in 2012. I adored her Eternal Sky trilogy, an epic fantasy set in an Eastern-inspired kingdom full of dynastic quarrels, a range of women who are terrifyingly powerful for a host of different reasons, and Dumpling, who will become your favorite fictional horse as soon as you meet her. Bear’s newest novel, Karen Memory, is simultaneously an alternate history science fiction tale and a steampunk western with a narrator you will not be able to resist.

The stories in this collection are consistent in quality even as Bear slips between genres. “The Cold Blacksmith” is an inquiry into the story of a character you’ll recognize from fairy tales, and “Love Among The Talus” takes another of those tropes and spins something both startling and meditative from it. “Annie Webber” takes “two characters meet in a coffee shop” and throws it into a nifty scifi whirlwind – just how many characters is this barista meeting anyway?

F-BOM delivers great SFF by women authors to you every two months. Become a member today.

Conservation of Shadows by Yoon Ha Lee came out in 2013. Reading this was a fascinating experience – not often do I feel the need to reread a short story right after I finish it. Not just because a piece is good (though Lee’s stories definitely are) but because I found myself needing another chance to wrap my mind around all the concepts being introduced.

Many of the pieces are influenced by and include elements of math and physics. While I won’t pretend an understanding of these besides what the author provides in the collection’s end notes, the incorporation of such into the stories is so graceful that even when I was aware of not being entirely sure how the science was working, it didn’t knock me out of the story or keep me from reading. Rather, it fueled my desire to reread and see what new details would come out without the original surprise of the concept.

While the math is there, these aren’t stories about math. These are stories about people, wrapped up in politics and conflict and love and tragedy. Speculative fiction allows for an almost-unending variety in setting and concept, but the coolest “idea” is nothing if the people you’re reading about don’t compel you to keep doing so. His stories will take your breath away and leave you lost in thought after each one. It’s hard to pick favorites from this collection but I will mention two: “Flower, Mercy, Needle, Chain” which breaks your mind a little, and “Ghostweight” which included deadly origami.

Yoon Ha Lee’s stories also include many elements of Korean mythology and history as well those of China, Japan and other cultures. The notes on each story at the end went into detail about many, and expounded on some of the particular historical events he modeled his works’ own conflicts on. His insights also demonstrate just how wide a range of influences he’s been inspired by.

I originally read this collection in order to participate in a local book club, not having run across the author’s work before. I’m glad circumstances conspired to get me reading his work and I can’t wait to see what he releases next.

I hope this post introduced you to at least one new author and gave you some ideas for what to pick up next time you’re in the mood for short fiction!