Yesterday, on my lunch break at work, I finished reading The Secret History of Wonder Woman by Jill Lepore. Unfortunately, since it’s due back to the library I can’t read it a second time like I want to (to read all the footnotes this time, duh!) but I will probably cave in and purchase it for myself the next time I have a Barnes and Noble 20% off coupon. I fully admit that I started reading this book not expecting to finish it. I have a terrible track record when it comes to non-fiction books, seldom getting past the first couple of chapters no matter how interesting the material ought to be. Not this non-fiction book though! I never even thought of putting this book down.

It inspired me. It captivated me. Jill Lepore held my hand as she lead me through the legal, social, economic, and political history of not just the character Wonder Woman, but also the feminist movement itself, both its villains and allies. What’s even more crazy is this: I want to read more nonfiction now. I have an itch to connect more of the historical dots of the feminist movement, and am seeking out other books that paint as clear (and entertaining!) a picture as Jill Lepore does in The Secret History of Wonder Woman. I would love to hear your recommendations in the comments section.

Half the fun of this book is the unexpected connections Wonder Woman has to some of the major players in the feminist movement, so I will not reveal those secrets here. But I will say this: the reason Wonder Woman’s “secret history” was unknown to the public until now is because her history is inseparable form the creator’s, William Moulton Marston’s, huge family secret. A secret so secret that no one let it slip due to the fear one of the parties involved would commit suicide. Fortunately, Marston’s descendants were willing to let Jill Lepore into their family history.

On the book’s back cover Alison Bechdel (the creator of the Bechdel test!) writes in her review:

In the nexus of feminism and popular culture, Jill Lepore has found a revelatory chapter of American history. I will never look at Wonder Woman’s bracelets the same way again.”

Trust me – you won’t look at Wonder Woman’s bracelets the same way again either! And get this: did you know that Wonder Woman’s popularity helped Ms. Magazine get off the ground? And it wasn’t just because she is on the front cover… 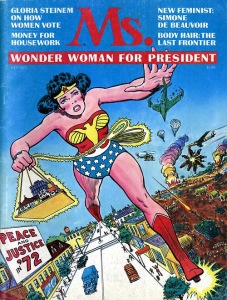 I never realized how huge an impact Wonder Woman had on feminism or how huge an impact feminism had on Wonder Woman. When I started reading the New 52 Wonder Woman comics last year, I didn’t know my new-found interest would lead me to the roots of first, second, and third wave feminism in America. I’m so glad I took a chance on this super-heroine, and that she has been reinvigorated for the modern day. 2017 can’t come soon enough…

Gah! This review is so hard to write! I want to tell you all the fun stuff I know now, but that would spoil it for you. Please, go to your library and check out a copy right this instant, spend all day reading the entire book, then come back and let me know your reaction in the comments section. Then we can gush about it together! 🙂

3 thoughts on “The Secret History of Wonder Woman”