I’d had Crazy Rich Asians by Kevin Kwan on my list for a long time, but it wasn’t until I heard the movie was coming out in 2018 that I prioritized it. I’m glad I read the book first, since the two are a lot different. A lot of the plot points are the same, but the goal of the stories is different. So I’ve decided to review both. My review of the movie can be found here.

I actually listened on audiobook, which was fun because all the accents and exasperated cries of “Alamak!” made it feel vivid and rich. Props to the voice actress for that.

Let’s dive into the details: 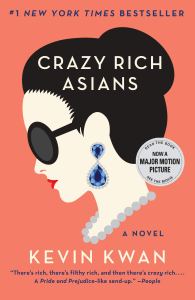 While Rachel is the main character, and the events of the story revolve around her experiencing Singapore, the wealth around her, and Nick’s family’s disapproval, the book Crazy Rich Asians is more of a satire than the movie, and so there really isn’t much character depth. As one friend of mine put it, “Nick is a cardboard cutout of a human being.” So though the story has a plot, there’s a lot of time spent just showing the overwhelming wealth of the characters, and the social stratification. Author Kevin Kwan’s goal was to reveal a part of Asian society not fully understood by his Western audience and he accomplishes that. The plot takes a backseat. Nevertheless, the book gains full points in these categories.

Recommended: Georgia crosses modern-day Asia on the hunt for the ancient secret to immortality in A.H. Wang’s The Imperial Alchemist.

The thin plot leads us directly into section four of the Scale. I really enjoyed the book, though it did drag in the middle as the hundredth ancient mansion and priceless gem and haute couture outfit was described. I was eventually numb to the extreme wealth and in this respect the book is better than the movie. In movies, I feel like audiences are too used to sweeping vistas and extravagant sets. The wealth of the characters didn’t have the same punch.

That being said, the wealth was really best shown through understated things like the blooming of the Tan Hua flower. The flower only blooms once a year, and only at night, so 99.9% of people will never see it bloom. Nick’s family? They’ve all seen multiple times.

Kwan also satirized the relationships and self-importance of the wealthy, as well as different Asian cultures. There was less of an arc or a fairy tale feeling in the book as with the movie. So if you’ve seen the movie, the book might feel boring, because the plot points are mostly the same. However the ending is different, and more time is spent on the interesting and funny cultural prejudices in Asia, so for that the book stands on its own.

Kevin Kwan wrote his Crazy Rich Asians trilogy to break stereotypes Western readers might have about Asia, and he certainly did that with this book. But there is also a lot in here for an Asian reader, or someone familiar with Asian culture. I’ve lived in China, so the prejudices and stereotypes playing out in the book were hilarious (billionaire Mainland Chinese women buying knockoff purses for the slight price cut, for example). So for Asian representation, although the execution was different from the movie, this book passes this section easily.

So there you have it. If you haven’t seen the movie yet, read the book first. And if you’ve seen the movie but want a deeper dive, just be aware that the book is trying to do something different, so it’s less syrupy than the movie, and the ending is not exactly happy or all wrapped up.

Come back next week for our comparison review of the movie. And I’ll probably review the sequel, China Rich Girlfriend, some day too, since the movie’s coming out eventually, and I liked that book even better than the first one.

Click here to buy Crazy Rich Asians, then tell us what you thought in the comments!