Cop shows – you either love ’em or hate ’em. I greatly enjoyed the original CSI for a period of time, but I eventually lost interest. Cop/crime shows seem to follow the same boring plot lines ad nauseam. At least, that’s what I thought until we finally sat down to watch Brooklyn Nine-Nine.

The show started off a little shaky for me. The humor was hit or miss with a bunch of cops trying really hard to be…cop-ish. Unexpectedly, the characters began to grow on me as the series continued. It is rare to see such a diverse cast of characters. I found myself most often identifying with detectives Rosa Diaz (played by Stephanie Beatriz) and Charles Boyle (played by Joe Lo Truglio): two very opposite characters. Rosa is my wanna-be alter ego, the no-bogus-I-got-this attitude that commands respect from even the toughest of perps. Boyle, on the other hand, is a charming little man who could sweep me off my feet faster than all the sweaty jocks in the world. It was just the comedy I needed as a pick-me-up after work. With the film industry dominated mostly by cheesy super-hero movies and depressing dramas, Brooklyn Nine-Nine is a refreshing escape. I am surprised to say that I would give the 9-9 a 15/15 on the HSA Scale of Inclusivity.

Not offensive to women = 1 pt*

This show was the least unoffensive to women I have seen come out of the millenium. Never were the women put in unnecessary, compromising situations.  The little flirting that was involved was rather funny and charming. Women were properly clothed as detectives and nothing was ever sexually suggestive. Surprisingly, they wore very little make-up, though my fiance and I wondered at times if they tried to lighten Rosa’s skin. The women were also diverse in their personalities. Amy Santiago (played by Melissa Fumero) is an intelligent and sharp detective. It is clear that she was a goody-two-shoes always looking to please her superiors and be the best. Rosa is a no-nonsense kind of woman who is blunt and to the point. She shies away from anything openly feminine, flirtatious or otherwise super bubbly, though it is clear she is a caring person. Regina Linetti (played by Chelsea Peretti) is a testament to today’s narcissistic generation who are always on their phones and obsessed with pop culture. This in no way diminishes her character, as I would have expected; instead, she proves to be a value to the police force and her friend, Jake Peralta (played by Andy Samberg).

While Jake Peralta is the star of the show, Santiago is his continuous rival as they battle their way to the top arrests and cases. While she often embarrassingly ingratiates herself to the captain on a professional level, it is clear Santiago has great pride in the work she does. Rosa is another supporting female character that blows stereotypes out of the water. She is tough, but not depicted as butch, and has a short fuse for idiocy. Everyone, both men and women, in the force respect her. Not only because of her attitude, but also because of her detective skills. 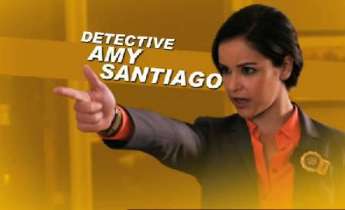 The 9-9 features three main women that make consistent appearances, and a fourth that makes an occasional appearance. Detectives Santiago, Rosa and the civilian administrator, Regina, rarely talk about men. The most common occurrence of relationship talk happens between Regina and Jake, who were childhood friends. The women often have to work together on cases and there is never any demeaning cat-fights or catty behavior. There is only one episode in which Santiago becomes jealous of Rosa, who immediately quenches this jealously by showing the honest truth instead of playing into the stereotyped passive-aggressive behavior. The fourth female character is the Deputy Chief Madeline Wuntch (played by Kyra Sedgwick). While petite, Wuntch is a cunning character who often plays the captain for all he’s worth. It is clear she revels in her power over him and anyone who may oppose her.

Brooklyn Nine-Nine was highly entertaining, more than I would expect from a cop show. I can’t wait to start the new season! The characters reflect real people that you may meet, or have met, in life. The plot is not overly predictable, but as with any comedy it is not at all complex. As I am not a huge drama person, I greatly enjoy that issues are resolved instead of in constant turmoil. The humor presented in the show does not strive to be politically correct, but nor is it overly rude and demeaning to groups of people. Instead, humor is found in natural and light-hearted situations.

This certainly has gone above and beyond the general media for several reasons. One is the fact that the 9-9 has one of the most diverse cast of characters I have seen on TV today. A startling move on their part was making the captain of the 9-9 a gay, African American man who plays by the rules and is strict, but respectful. Captain Raymond Holt (played by Andre Braugher) is a lovable anomaly who seems to barely change his face in response to anger or happiness, yet he consistently pulls through for his team. Another anomaly is Sergeant Jeffords (played by Terry Crews), an almost stereotyped African American man, except that stereotype is downplayed by the contrast of his physical strength, to his soft, teddy-bear instincts. He often makes the joke that he has big kids at work he has to take care of as well as his twins at home. While often frustrated by their antics, it is clear Sergeant Jeffords cares deeply for all on his team and is there to offer them support. Finally, Santiago’s character is a great feat because female cops are often seen as butch, brutal or overcompensating in force and attitude. Santiago is none of that. While she consistently seeks approval from the Captain, she remains a delicate and feminine woman who loves her job solving puzzles and is spanking good at it. Brooklyn 99 did a fantastic job with their cast of characters and their humor is refreshing after the first episode. Instead of making relationships and women the butt of jokes, the humor crosses over many issues from crime to Boyle’s quirkiness to Rosa’s personality to office politics.

I would highly recommend Brooklyn Nine-Nine for those looking for a new show, comedy, or those who just need a break from the other monotony available. You can watch seasons 1-2 on Hulu or catch up on new episodes at Fox.com.

*This is a category that could get very complicated, very quickly, if we tried to list everything that could be offensive to women. Instead, we use this category as a way of showing our own personal reaction to whatever we are reviewing. All contributors to this site are women and can speak from a woman’s perspective. However, no woman can speak for all women so we do our best to explain our choice one way or the other. We encourage all readers to share their opinions in the comments of every post if they want to express agreement or disagreement with our rankings.