Color me surprised to be writing this post. I had no desire to watch “Hercules” last weekend, but the fateful roll of a D20 made it so. (Sometimes a random dice roll is what it takes to make a decision on what to watch next.) Perhaps it was my low expectations, perhaps it was my general Saturday good mood, or perhaps it was the good company with whom I watched it, but I ended up enjoying the movie quite a bit. As a long time fan of Kevin Sorbo’s brand of Hercules, I had my doubts with regards to Dwayne Johnson’s ability to pull of this mythic character. After all, the 90’s television series gave birth to my favorite show of all time!

Overall, this version of Hercules was not too shabby, and it earned a 7 out of 15 points on the Scale of Inclusivity despite being about a dude and only featuring two women as supporting characters. A 7 may seem really low, but you’ll see why it earned its place on Her Story Arc!

Not offensive to women = 1 pts*

By the end of the film, I did not find myself physically or emotionally uncomfortable by how the women characters were speaking, acting, or portrayed in this movie. I prefaced that sentence with “by the end of the film” because of one moment early in the movie that was later dutifully explained and thoroughly redeemed.

The scene in question was between Atalanta, an Amazon woman in Hercules’s crew, who steps between Hercules and a wealthy woman seeking his help. I read the scene as Atalanta being defensive and jealous, wanting to prevent this beautiful woman from capturing his attention. However, it is explained later that Hercules asked Atalanta to keep him safe from potential attachments (relationship-wise) because he was afraid of hurting people he gets close to. Not only was this a rather touching revelation, but it revealed my own internalized misogyny by making me question why I thought the interaction between those two women had to have a romantic motive.

In addition, while Atalanta’s body armor would probably get a few strikes on Bikini Armor Battle Damage’s Female Armor Bingo Sheet, so would our main character Hercules’s armor. I should probably point out that Hercules does not have god-like strength in this adaptation, so there really isn’t a good excuse for it. He is just a really buff dude with a group of friends who help him look more impressive. In fact, Hercules’s chest plate (and the chest plates of his army) come with their own six packs.

“Hercules” is light on women characters, but the ones that are present have important roles to play. They don’t feel like token women additions, and that’s important. First, we meet Atalanta, whom I’ve already mentioned is an Amazon. She fights in Hercules’s entourage and has Legolas-equivalent archery skillz.

Ergenia, a widowed princess and single mother, seeks out Hercules’s help. Her character is multi-faceted, and her motives are not clear at the start. Ergenia’s character could easily have fallen into just a vehicle for a lazy romance sub-plot, but that does not happen at all. While there are some hints of a relationship growing between her and Hercules, it is motivated by more than romantic love and does not have a romantic climax. 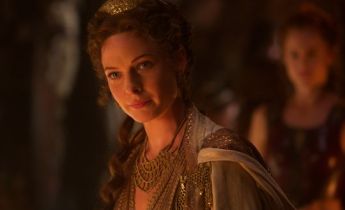 Megara, Hercules’s deceased wife, plays a very small role in the film. Her death and the death of her children are a large motivator for Hercules, and overcoming the trauma is an important part of his story arc. While death of a female relative is often used, and usually feels worn out from use, in this case it felt integral to the story. In fact, it reminded me of how Max, in Mad Max: Fury Road, was overcoming his demons from the past.

Atalanta and Ergenia have two encounters, but in both situations the topic is Hercules.

“Hercules” is not nearly as predictable as you think it will be, given that it’s essentially a re-telling of a myth that has been retold countless times already. What made this stand out from the rest is how the story speculates on the origin of myths like centaurs and three-headed dogs. I enjoyed the blurring of reality with myth; it lent the movie a sense of mysticism and made us unsure of whether we could trust our eyes.

My favorite aspect of the story was the team dynamic of Hercules’s entourage. As I’ve mentioned already, in this version Hercules is just a really buff dude. The talents of his friends help to magnify his strength, and the eloquent tongue of his nephew (similar to Xena’s Gabrielle) exaggerates Hercules’s achievements and tells the stories to anyone who will listen, helping to turn his unusual muscle mass into a living myth. The friendship between Hercules and his entourage gave this movie a lot of heart. I was moved by the ending, and felt emotionally satisfied when the credits rolled. If you love fantasy movies, and anything mythical, you’ll enjoy this story – I guarantee it!

Above and Beyond General Media = 0 pts

Since the story is named for, and largely concerning, a male character this category does not earn any points. “Hercules” does not go above and beyond its peers with regards to inclusion of women. However, not every story has to go above and beyond general media. Not every story has to be about women, but that doesn’t mean there won’t be women in the background or as tertiary characters. It was really nice to kick back and watch a movie about a male hero where the writers and director didn’t put down the women in the story in order to lift up the man’s story. Nay, it was a relief!

*This is a category that could get very complicated, very quickly, if we tried to list everything that could be offensive to women. Instead, we use this category as a way of showing our own personal reaction to whatever we are reviewing. All contributors to this site are women and can speak from a woman’s perspective. However, no woman can speak for all women so we do our best to explain our choice one way or the other. We encourage all readers to share their opinions in the comments of every post if they want to express agreement or disagreement with our rankings.

2 thoughts on “Hercules Isn’t a Zero”