Interstellar (2014) is one of those films that doesn’t suggest in the trailers that it’s going to be as complicated as it is. I still don’t understand what happened or how it all worked, but that’s usually a given with Christopher Nolan films – I’ve watched Inception (2010) many times but still don’t really get that.

In Interstellar the possibly not too distant future Earth is becoming more and more uninhabitable due to crop losses and huge dust storms. Professor Brand (Michael Caine), a NASA physicist, sends ex-NASA pilot Cooper (Matthew McConaughey) and a highly intelligent team of researches through a wormhole across the galaxy to investigate three planets, to determine whether humans can inhabit any of them. 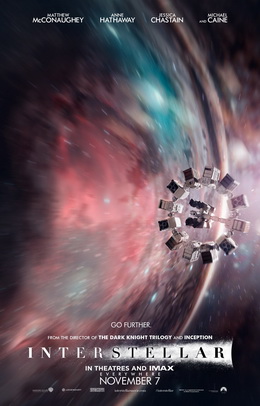 With real in-depth character development, an intriguing concept, and interesting handling of time manipulation theories, I really enjoyed this movie. It’s probably best enjoyed and understood when you are in the right mind for concentration and there are few distractions…

WARNING THERE ARE SOME SPOILERS AHEAD

Here is how  the film stood up to the Her Story Arc Scale of Inclusivity:

Not offensive to women = 1 pts

The female characters in Interstellar are all portrayed very positively in that they are incredibly intelligent and are key to the plot of the film.

Arguably, 2 out of 3 main characters are female, one being Cooper’s daughter Murph (Jessica Chastain) and the other a researcher, Amelia Brand (Anne Hathaway). These two women are both highly intelligent and key to the story development. Murph is the key to finding the solution to Earth’s problem, and ultimately the reason why humanity survives, and Amelia is heroic on the journey through the wormhole. Both female characters earn a similar amount of screen time throughout the movie, but serve very different purposes.

We actually see Murph grow from a 10 year old girl to at least 100 years of age, as the time dilation element of the film allows Cooper to barely age, compared to Murph’s years still on Earth. It’s interesting to see the character transform as she grows, and is well performed by all the different actresses who play her.

Passes the Bechdel Test = 1 pt out of 3 possible pts

This was difficult to determine as it passes on a technicality, but not in spirit. Murph speaks to her sister-in-law Lois over the dinner table, but mainly they talk about the health of Murph’s nephew. They do discuss Murph staying the night as they are worried about her, but it lasts a matter of seconds as Murph swiftly declines.

Artistic and / or Entertaining = 4 pts

This is perhaps the most obscure and confusing film I’ve watched since Inception, but it’s challenging and thought-provoking. I did watch it at 8pm on a Friday night, however, which probably wasn’t the best idea – I recommend viewing it in the daytime for optimum understanding!

With a love for time travel (my favourite film is Back to the Future) I really enjoyed being challenged thinking about the gravitational time dilation theories and how they would affect humans physically. It also delivered exceptional arguments as to why we as a human race need to start acting differently about how we treat our environment, something that is a very current issue in the media. 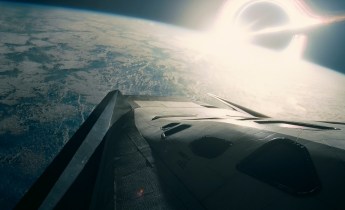 The aesthetics of Interstellar are vastly beautiful, giving you time to take in the stars and planets that dot our skies. The depth of space is haunting and the whole film really draws you in with music and colours, so even if you don’t know what’s going on, you can just enjoy the view!

Time play is always a tricky choice for filmmakers and it’s difficult to get right because it’s so complicated – making it believable is a real task but Interstellar achieves this by miles. It’s very clear that plenty of research has been injected into making this movie, and where it might not be scientifically possible to jump through wormholes, the film makes you as an audience feel like it’s plausible.

With regards to the female characters, Murph is literally the chosen one to save the Earth. We are led to believe that Cooper is going to save the world, but instead he is the one sending her the hints ‘through time’. The new home for humanity is named ‘Cooper Station’ and when he wakes up there, he thinks it’s named after him, but it’s actually in honour of Murph (it’s their family name).

The filmmakers had the perfect opportunity to craft Amelia into Cooper’s love interest; spending endless years on a small ship together would surely draw out human instincts? Instead, we learn that Amelia is in love with one of the previous explorers who set out on an original mission to find a habitable planet. It’s clear that she wants to divert to find him, but instead they continue to another planet. It is Cooper who makes the drastic decision for her that she should go to her love interest’s planet and he sends her off as he disappears into a black hole.

What makes this film really special is that every character that knows about the mission is brave. There is no weaker character who attempts to save themselves leaving everyone in the lurch. Everyone works together to achieve a successful result for the survival of humanity.

Interstellar is a film with few characters and where it could be argued that there should be more females, there is not necessarily any room for more males either. Keeping the cast tight and limited shows us how desperate NASA is and how few resources they have left, with humanity becoming endangered. As you can imagine,  in such a world, there isn’t much demand for scientific research as there is for food (or so they think).

With a female protagonist who saves the human race, and who is more intelligent than most of us would like to admit, this film does a lot for female representation in the media. Nolan is unafraid to show us how women grow from children to wise old ladies and refrains from basing characteristics on sheer beauty and romance alone. He also delivers us a female character to be proud of, who uses her intelligence to actually save the remaining human race. How many protagonists without super powers can say that?