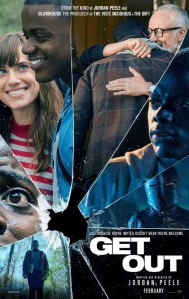 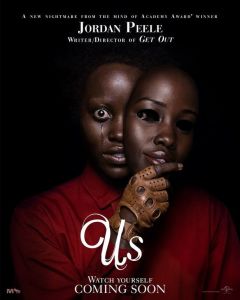 That’s right, there can be only one! I watched Get Out and Us for the first time back-to-back, and thought they were both excellent. I’m not alone. Jordan Peele’s social-commentary horror movies have crazy high ratings on review sites like Rotten Tomatoes. (Yes, I’ve seen Lovecraft Country too!)

But despite both receiving critical acclaim, the movies are quite different from each other. Therefore, it is up to us to decide which one you should watch on Halloween.

Both movies score points here. Get Out really mostly focuses on main character Chris. He is the victim, and pretty much on his own for most of the movie. That being said, there are many women characters in different roles. The standout is, of course, Allison Williams as Rose. This movie barely passes the Bechdel-Wallace test.

In Us, two women square off against each other: Adelaide, and her double, Red. Each character has a doppelgänger, and I have to applaud the child actors for doing so great in their roles as well.

Both movies use classic horror tropes to great effect, especially when viewed through the mirror of race. In Get Out, we watch our protagonist willingly isolate himself in a remote area, where his cell phone is constantly out of battery. While there, he is subjected to manipulation and eventually torture, leading up to the explosive finale.

Us is equally bloody. The psychological torture begins early on in the film, and so there are more fight scenes throughout (in contrast to Get Out, which has more of a creeping sense of unease over most of the film) as the family tries to escape their doppelgangers.

What I like about both movies are the light touches of character notes or development. Jordan Peele clearly has deft hand, and knows when to drop a significant look or a moment of clarity. Get Out is more bare bones, but we understand Chris’ actions at the end of the movie.

Us requires more flashbacks for exposition for the slightly more complex story line. However, after watching the movie, I did not understand why some people were confused about the ending. I think the theme of Us is even more clear than Get Out. (You’ll have to Google those articles, since I don’t want to link to spoilers.)

The movies are famous for their social commentary, so I think I can give full points here without needed to spoil anything to justify it. Like many people, I went into Get Out already knowing the main plot twist. However, there was more to the story than I realized. One of my favorite lines was Chris’ “Why black people?” The lack of an answer rang out from the movie into our world.

I heard Us described as a title that “cuts both ways”, an excellent descriptor for a horror film. Us questions who belongs–and what lengths someone can go to be included. Race is never mentioned, but the obvious allusion pervades the film.

For me, Us edges out Get Out by a slim margin. I expected to like Get Out better, but found myself gripped by Us. When Adelaide and Red faced off and the ballet music started up, and I knew I was watching something amazing.

Which movie did you like better? Let me know in the comments if you strongly disagree with my take!