If this is your first time reading this blog series, check out parts One, Two, and Three!

I have to start this post off by giving a special thanks to Gygax Magazine and /r/DungeonsAndDragons for being so supportive of the blog series so far. I have also received personal messages, public comments, Facebook shares, and retweets from kind strangers showing their support. Thank you everyone! This journey has introduced me to *gasp* other women dungeon masters out there as well. See, we do exist! Here are some more links as “proof” 🙂

On a snarky side-note, Buzzfeed recently posted an article entitled “21 Questions Girls Who Play Dungeons and Dragons are Sick Of Answering” which will give you a few laughs and obligatory eye rolls.

NOW – on to the Dungeon Mastering – Sally forth, tally ho, grab your sword, grab your bow!

My favorite part of Dungeon Mastering is building the world in which the characters will play out their fates. For those of you who have ever tried your hand at writing a novel you’ll be somewhat familiar with the mental process of world-building already. For me, it helps to start out by drawing a map. To begin, I create places on the map that fit with events I have already come up with for the overarching campaign plot. Once those key areas are done, I add fun stuff, like water towns, stinky bogs, no-woman’s-lands, etc. I find that as I add new, quirky places to my map that I start getting ideas for the campaign, so I make sure to jot everything down for later reference.

The final touches of the map should be influenced by the backstories of the characters. If someone says they come from “the mountain region”,  I have to make sure such a region exists. I want each character to be able to point to their home town. In addition, if they included events in their backstory you can add the places those events took place onto the map too. Don’t be afraid to include your campaigners in the map creating process! 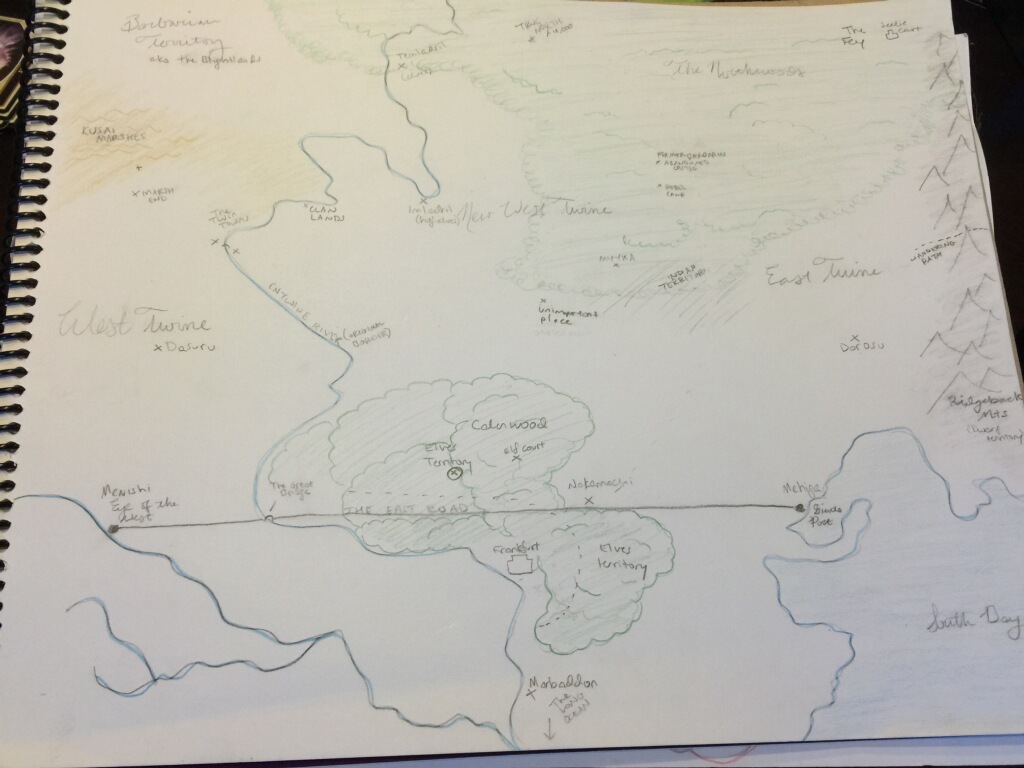 This map was from my first campaign. In my second campaign I drilled down into one city on the map, and used Excel to create a detailed, color-coded cityscape. These are just two of many ways you could create a map of your world. Who knows, you might find yourself mapping out an entire galaxy depending on the TTRPG you’re playing.

If you are really interested in doing an entire campaign in one city, I suggest you check out this Reddit thread.

Once you have a map ready to go, you need to figure out where the group of characters are going to meet each other for the first time. Yes, yes, yes, the typical tavern will do nicely, but don’t forget that they all should have a reason to be there. If they haven’t given you a reason, you’ll need to come up with something plausible. During my last campaign I gave each player a piece of paper describing why they were at the tavern, and I also included something they either knew (or had heard rumored) about one of the other players. They read these sheets of paper to themselves, and then the campaign began.

To add another level of “realism” to the start of the campaign, I used dry erase markers on the table mat to draw a birds-eye-view of the cross street where the tavern was located, complete with other mini-figs and lots and lots of pennies to illustrate where city guards were (it was during a rowdy festival).

Here is a good example of why it’s important to remember that you don’t control the characters in the story: at the very start of this campaign one player rolled a 1 on a D20 dice check (DC) when trying figure out how drunk he was, resulting in his halfling falling to the ground in a drunken stupor. Another player took his character’s stoicism a little too far, making almost no attempt to introduce himself to the other players. The player who had been charged with looking after the halfling’s safety (according to his written sheet) didn’t see anything wrong with the halfling laying on the floor. The last player kept telling me it wasn’t plausible for him to stay and meet the others.

With some coercion, a drunken non-playable character (NPC) bard, and the help of the NPC woman who owned the tavern, I figured out a way to force this ragtag group to talk to one another. Needless to say, it did not go as planned. But in the process I learned that (with this group anyways) they don’t like the role playing side as much as they like the hack-and-slash side. From then on I made non-fighting encounters a little more structured since that seemed to be their comfort level. You will find yourself constantly tweaking your strategy to accommodate playing styles as the campaign goes on.

Given that you probably won’t do an entire campaign based in one city (although it is fun!), it is time consuming to manually create a town map for every place your players travel to. Fortunately, there are some handy, free, online tools that will help you out. I like Inkwell’s random city map generator quite a bit. You can give it some specifications and it will spit out a random map for you. When I knew my players were going to spend a lot of time in one town, I printed out a map using this tool and used a pencil to add more details, such as the location of a specific store or home of an important family.

And what would Dungeons and Dragons be without the dungeons? Again, while it is fun to draw things out by hand, sometimes it’s just so much more convenient to have the internet do it for you. Donjon’s Random Dungeon Generator can pretty much handle all your dungeon crafting needs. It has a variety of settings you can mix and match to get the dungeon you’ve always desired. Bonus: it generates booby traps, secret doors, and baddies to fight.

My fiance also came up with a really cool way to use the Random Dungeon Generator.

This was a fun way to make the experience more immersive and, since the projector required dimming the lights a bit, it added to the ambiance. If you prefer something more tactile to play with, Dwarven Forge can’t be beat. Last year my fiance and I invested in the Dwarven Forge Kickstarter and got ourselves a pretty sweet set up (it came with the spiderwebs!):

So there you have it folks! Some tips and tricks to create the world your campaign is going to be set in. Stay tuned for Part 5: Ambiance and Non-playable Characters.